Celebrating 100 Years of Music In Oregon
JOIN US

Congratulations to our 2020 Grand Cup Recipients! 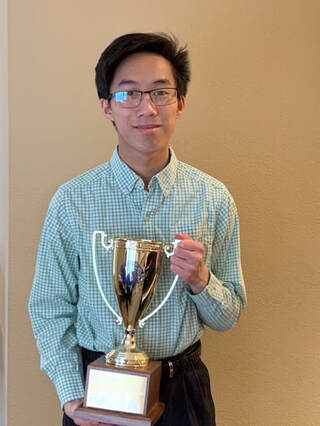 ​Dan Ha, Grand Cup (5th)
Congratulations to Dan Ha, student of Linda Greer, on earning his 5th Federated Festival Cup! Dan started playing the piano around 7 years old, participating in festival and theory events each year and earning multiple superior ratings. He also joined his school’s orchestra on the viola. Three years ago, he joined Mrs. Greer’s studio, where he also began participating in the syllabus and concerto events. Outside of lessons, he occasionally played piano for his school's symphony, wind ensemble, jazz band, and was an accompanist for his friends. At home, he enjoys composing and arranging music, whether for piano or a mix of instruments. Dan graduated from McKay High School in Salem, Oregon as a valedictorian and plans to attend Portland State University in the fall. He plans to study computer science with a possible minor in music. 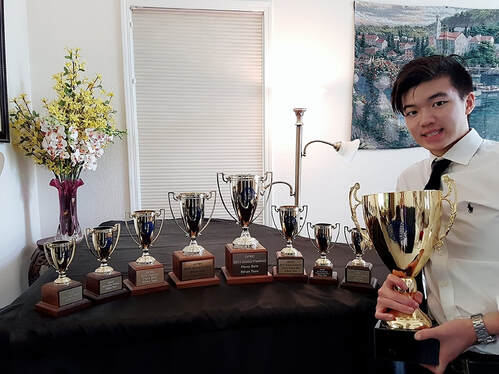 Ethan Tsao, Presiden't Cup, (6th)
​Oregon began his piano studies at age four with his mother, Fen-Fang Tsao. Ethan earned his Federation President's Cup in 2019 after participating for fourteen years in Piano Solo and three years in Piano Concerto events. He also received his third cup in Piano Duet after nine years of participation. Ethan was the winner of numerous Oregon
Music Teachers Association (OMTA) festivals, a winner of the OMTA Trula Whelan Concerto Competition, and participated in the Portland International Piano Festival Young Pianists Institute master class with Randall Faber. He enjoys playing violin and has been a member of Portland Youth Philharmonic for seven years. Ethan graduated from Southridge High school this year, where he was active in his school’s science club, school musical, and National Honor Society. In addition to his musical achievements, Ethan is very involved in sabre fencing, fencing in tournaments around the United States. He will be attending WashU in St.
Louis in the fall. 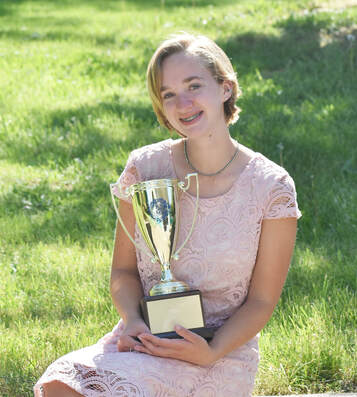 Abigail Sauble, Grand Cup
​Abigail is the second-to-youngest of eight kids and has played piano since she was four. Through the years, Abigail learned other instruments such as flute and bassoon. She enjoys singing, whistling, spending time with friends and family, and is an "extroverted introvert."
Her other interests include (portrait, macro) photography, short-story writing, baking, sketching, English Country Dancing, volleyball, hiking, and organizing.
Next fall Abigail will attend Adelphia Bible School and move away from home for the first time. After that, she will get an associates degree in either Graphic Design or Computer Information Systems.
"Music will always remain an integral part of my life, and I am forever grateful to Jill Gambill, my aunt and music teacher, who has taught me a lot, and continues to encourage me.  Soli Deo Gloria!" 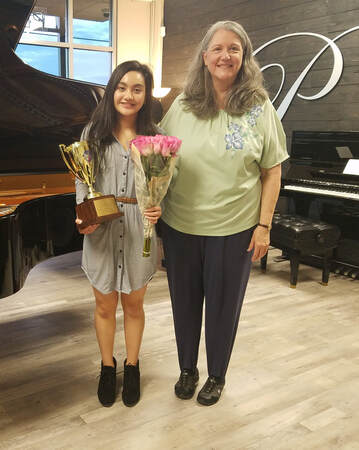 ​Lydia Khaw, Grand Cup
​From a young age, Lydia Khaw had a fascination with learning to play musical instruments. At three years old, following in her three older siblings’ footsteps, she began taking piano lessons from a friend and music teacher, Jill Gambill. Watching her older siblings accelerate in their musical talents gave her strong motivation to continue practicing music. In the year 2005, Lydia participated in her first piano festival in Portland, Oregon at the age of three. Since then, with the encouragement and support of her teacher and family, she has continued playing piano solos in the National Federation of Music Clubs’ annual festivals. Recently, in 2016, Lydia began performing concertos for Festival as well. By next year, in 2019, she plans to continue gaining points in hopes of achieving the 6th President's Cup. Furthermore, she has taken part in Oregon Music Teachers Association Syllabus and continues to work towards finishing Level X, the final and most difficult level. Over the years, her joy of piano eventually led to learning more musical instruments, including drums and flute. Besides practicing for musical competitions, Lydia also enjoys playing her favorite pop pieces on the flute and piano. Lydia accredits her passion for playing music to her family, and teacher, Jill Gambill, who continue to support and encourage her throughout her ongoing musical challenges.
​ 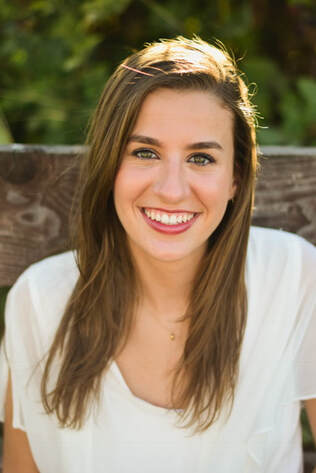 ​
​Maggie Bick, Grand Cup
​Maggie has been playing in Junior Festivals for eleven years. She has been studying with Barbara Berg, NCTM, and is currently studying with Pauline Eidemiller, NCTM. Maggie recently completed Oregon Music Teacher Associon’s Extended Study of Musicianship and Repertoire program, (ESMAR) and is now focused on completing the Syllabus program. Aside from her formal studies at the piano, she enjoys accompanying her school choir.
Maggie is also focused on becoming fluent in Spanish. She is looking to study International Studies or Economics in college and hopes to utilize her second language. As well, she intends on minoring in music to continue a formal study at the piano.  Maggie is looking forward to another year of Junior Festival and applying the knowledge she will gain from the adjudication. 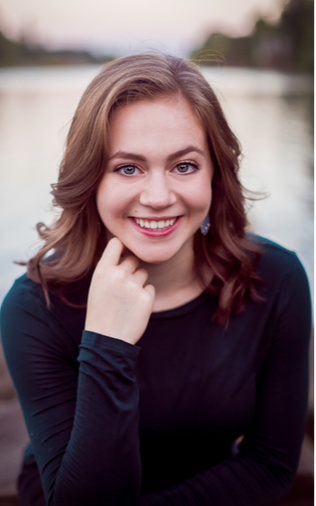 ​Elizabeth Cichoski, Grand Cup
Elizabeth has been playing in Junior Festival for thirteen years. She has had
four different teachers, and currently enjoys studying with Heidi Evans. She has been a student
member of the Oregon Music Teachers Association since 2015, and was the first student member
of the Tualatin Valley District. She has taught piano for four years, teaching up to seven students
at a time. Her students have participated in OMTA events as well as Junior Festival, and she
feels blessed to be a part of such a great program.
Lizzy has always been musically involved, and has enjoyed participating in choirs,
musicals, and of course, piano. She currently accompanies her school choirs, and has been her
church organist for the last three years. Beyond the keyboard, she was chosen to sing in the
Oregon All State Treble Choir, and was the captain of her high school swim team. Lizzy is
looking forward to one more year of Junior festival, and is excited to see where her music will
take her.